THE READINGS -A key to spiritual enlightenment-

The world is full of disturbing events and crimes reflecting people’s frustrations. People are dying of illnesses.
For us living in this era of chaos and devastation, “The Readings” is sure to be a wake-up call.
The readings, given by Edgar Cayce, 20th century’s greatest man of miracles, point out that the cause of illnesses is linked to the way we live and to the past karma accumulated in the subconscious layer of one’s mind.

“Whatsoever a man soweth, that shall he also reap.”

According to the state-of-the-art quantum theory, every thought, emotion, feeling, and action is recorded in a compendium called Akashic records. Every deed(“karma”) is saved at quantum level.
Even after we lose our body in the present life, all of the information is embedded in the subconscious mind to be passed down to the next life.
Cayce’s readings indicate that the embedded information can be rewritten by understanding, accepting, forgiving, as well as offering love and blessings to the person connected with karma. To have “grace,” or compassion, in our life is indeed important.
If each and every one of us can awake to this idea, we can further evolve, overcoming karma.

The movie “The Readings” will prompt us to a new awakening and help us survive the new era. 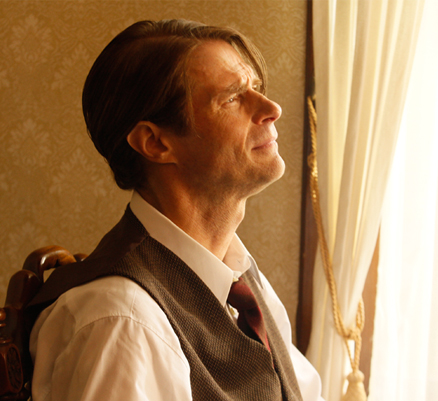 When Edgar Cayce, “the Father of Holistic Medicine,” was under hypnosis, he could see through a person’s body no matter where the person was and give a reading.

Not only could he provide medical knowledge such as the cause of disease and its treatment, but also answers even to questions on the universe. How did he acquire and develop this incredible ability? Why did God give the enigmatic power to Cayce?

Through major illnesses of this age, the movie closes in on the life of Cayce and the mystery of the readings with the help of Shigeru Mitsuda, the president of the Edgar Cayce Center in Japan.

Shigeru Mitsuda
President of the Edgar Cayce Center in Japan

Mitsuda awakened to spirituality after reading Many Mansions at the age of around 20. After completing his Master’s degree, he worked with a governmental research institute for four years. He then devoted himself to the research, translation, and writing in the field of spiritual philosophy. His books and translations include Edgar Cayce ryoho no subete(A to Z of Edgar Cayce therapy), Nemureru yogensha Edgar Cayce(Edgar Cayce, the sleeping prophet), and Many Mansions(Revised translation).

Miura came to realize the limitation and contradiction of western medicine when his relative developed cancer. He studied manipulative therapy, diet therapy, natural therapy, and psychological therapy. By combining them with western medicine as needed, he provides comprehensive medicine that enhances natural healing ability. He started researching and practicing Cayce therapy 20 years ago. His motto is “Never give up because they say it’s intractable.”

Yoshimoto debuted as a songwriter in 1984 after working for an ad agency. Also an essayist, her works include Yomudakede takusan kiseki ga okoru hon(Read and miracles would happen). She now leads a project called “The Life Artist Academy with Yumi Yoshimoto” with the theme “Live to rejoice your soul.” She holds classes and membership seminars to brush up one’s linguistic skills and expressions.

Ikegami headed the department of obstetrics and gynecology at Ageo Central General Hospital before he opened his own clinic in 1989 in Yokohama City. By September 2016, he had attended about 3,000 births. His presentation on prenatal memory at a national meeting of doctors in September 2001 was picked up by a newspaper and gained attention. He is now working to make prenatal memory widely known to the world.

Hagiwara has specialized in digestive surgery, endoscopic diagnosis and treatment, and palliative care for more than 30 years at academic medical centers such as Tokyo Women’s Medical University Hospital and St. Marianna University School of Medicine. He is now an affiliate professor at St. Marianna.
As the director of Ihatovo Clinic, he performs comprehensive medicine putting weight especially on the mental side of treatment. He practices and promotes hypnotherapy.
His books include Zenseryouhou no kiseki: Gekai ga kaimamita tamashi no sonzai(The miracle of past-life therapy: the existence of souls from a surgeon’s experience).

Furuya has experiences with psychosomatic medicine at LCC Medical Institute on Stress and Obitsu Sankei Hospital. He is the director of Akasaka-tameike Clinic, which he opened to perform holistic medicine. He is also engaged in a forest training program that enhances one’s natural healing power. He is the chairman of Japan Holistic Medical Society.
His books include Karada to kokoro no shizenryoho(Naturopathy of Body and Soul), and Shinrinryoho handbook(Handbook of Forest Therapy).

Ishikawa studied at Bach International Education Programme in the U.K. He has put forward a theory called “informed self-choice” that enables one’s self-healing power. He continues his research into application of bach flower remedies. He believes that mind and food are the foundation of health and illnesses, and restoring the Yin-Yang balance and eliminating all contradictions and alien matters from one’s body and soul are the crux in recuperation. He also believes that every condition can be improved by adjusting the four major elements, which are food, exercise, sleep, and excretion.

McGarey is a pioneer of Cayce therapy. She is a founding member of The American Holistic Medical Association and The Academy of Parapsychology and Medicine. She is known as “the Mother of Holistic Medicine.” McGarey also has deep knowledge and experience in Eastern medicine, training other physicians how to practice acupuncture after being the first doctor to utilize it in the United States.

Sidney D. Kirkpatrick is an award-winning documentary filmmaker and bestselling author. His book Edgar Cayce: An American Prophet is considered the definitive biography of Edgar Cayce. No other author was given such complete access to Edgar Cayce’s correspondence, traveled as widely to research the subject, or uncovered such a wealth of new material on the man regarded as “the father” of the New Age movement. His critically acclaimed non-fiction books include The Revenge of Thomas Eakins and Hitler’s Holy Relics. HBO, the History Channel, the Discovery Channel, and the A & E Television Networks have all featured his work. Biographical profiles of Kirkpatrick have appeared in The New York Times, Time Magazine, The New Yorker, and Playboy. He is a graduate of Hampshire College and New York University’s Tisch School of the Arts. He is a regular presenter at A.R.E. Conferences online, in Virginia Beach, and across the U.S. and Canada. He and his wife Nancy are the editors for A.R.E.’s Member magazine Venture Inward. Their most recent book is True Tales from the Cayce Archives: Lives Touched and Lessons Learned from the Sleeping Prophet.

Kevin J. Todeschi is executive director and CEO of Edgar Cayce’s A.R.E. and Atlantic University. As both student and teacher of the Cayce material for 35 years, he has lectured on five continents in front of thousands of individuals. A prolific writer, he is the author of more than 20 books, including Edgar Cayce on Auras & Colors: Learn to Understand Color and See Auras, The Rest of the Noah Story, and Edgar Cayce on the Akashic Records. Known for his ability to explain complex subjects in a straightforward and easy-to-understand manner, Kevin is popular for his insight and his sense of humor. One focus of his work has been to assist individuals in seeing how they are very much responsible for bringing about the New Age of enlightenment. His latest book, co-authored with Henry Reed, PhD, uses simple concepts and language to explain the sometimes complex wording of the Edgar Cayce readings, with Contemporary Cayce.

The author of Beyond Soul Growth: Awakening to the Call of Cosmic Evolution. She is a teacher, writer, and hypnotherapist-life coach with more than 40 years of experience with both traditional and alternative approaches to spirituality. Her earlier books, Edgar Cayce and Christian Faith and Reincarnation: Claiming Your Past, Creating Your Future, as well as her home-study courses, Meditation Made Easy and How to Discover Your Past Lives, have all explored Cayce’s contribution to leading topics in contemporary spirituality. Over the past several decades, Lynn has conducted numerous seminars in cities throughout North America and several international locations. In addition to her writing and seminar work, as a certified Master Hypnotherapist and hypnosis trainer, Neuro-Linguistic Programming (NLP) Practitioner and Life Coach, Lynn maintains a private practice in Virginia Beach, where she works with clients on everything from habit change and personal healing to exploration of deep spiritual themes. In addition to her work with The Journey to Wholeness and Integrative Growth program (Journey2Wing.org), she is a regular mentor for A.R.E.’s online learning programs.

John Van Auken is an internationally renowned speaker, long-time staff member and current Director at A.R.E. He is the author of many books including From Karma to Grace, 2038: The Great Pyramid Timeline Prophecy, and Edgar Cayce on the Spiritual Forces Within You and is a regular contributor to Venture Inward magazine. He is an acknowledged expert on the Cayce readings, the Bible, ancient prophecies, world religions, and meditation.

Camus is a French-American born in the State of New York. He lived in different countries during his childhood due to his parents’ work. After studying drama and art at a university in New York, he moved to Japan and started his carrier in the show business. He has taken part in Modern Kyogen, a theatrical performance chaired by Kiyotaka Nanbara, since 2009. In September 2010, he wrote a book The Ikumen, describing his child-rearing experience as a father of two sons and a daughter. He is appearing in NHK WORLD TV’s J-Trip Plan and is a narrator of a TBS program Enjoy the Seven Oceans-World Summer Resorts. He belongs to Media International.

Looking at what’s happening in the world, I feel the distortions that came about from the limitations of which the value of materialism has reached. People can’t find their meaning of life, saying there’s no point living. For others, getting promoted, gaining good reputation, or becoming rich are their only goals, thinking nothing else is valuable. I find such view dominating this world.

Are we like machines? Is it that if we die, that’s it? Is there no meaning in living no matter how we live? Fundamentally, life is connected seamlessly and is flowing cyclically, and that’s what life phenomenon is. If you can’t find a meaning of life or a value other than a materialistic one, the result would be self-destruction.

Thanks to the advancement in quantum mechanics, the concept of “what remains in the field of information filling the universe will continue to exist even after a man’s body is lost” is being scientifically verified. The way we live, and the actions and deeds we take are recorded at quantum level, and that information, through unconscious memory, continues to influence our body.

It’s an area we’ve been calling the “soul.” And the accumulated information recorded in that area will have impact at physical and material levels.

If you harm someone, you eventually receive that information through subconscious mind, and if you offer love and respect to others, then you will receive that information through your memory. Your dedication and devotion to human beings, all living things, the earth, and the universe, will eventually come back to you. Everything is connected and whatever you do is in the end for yourself.

If each and every one of us realizes this, the world will definitely change. The earth will move towards recovery, and we will feel from the bottom of our hearts that we are fulfilled and happy.